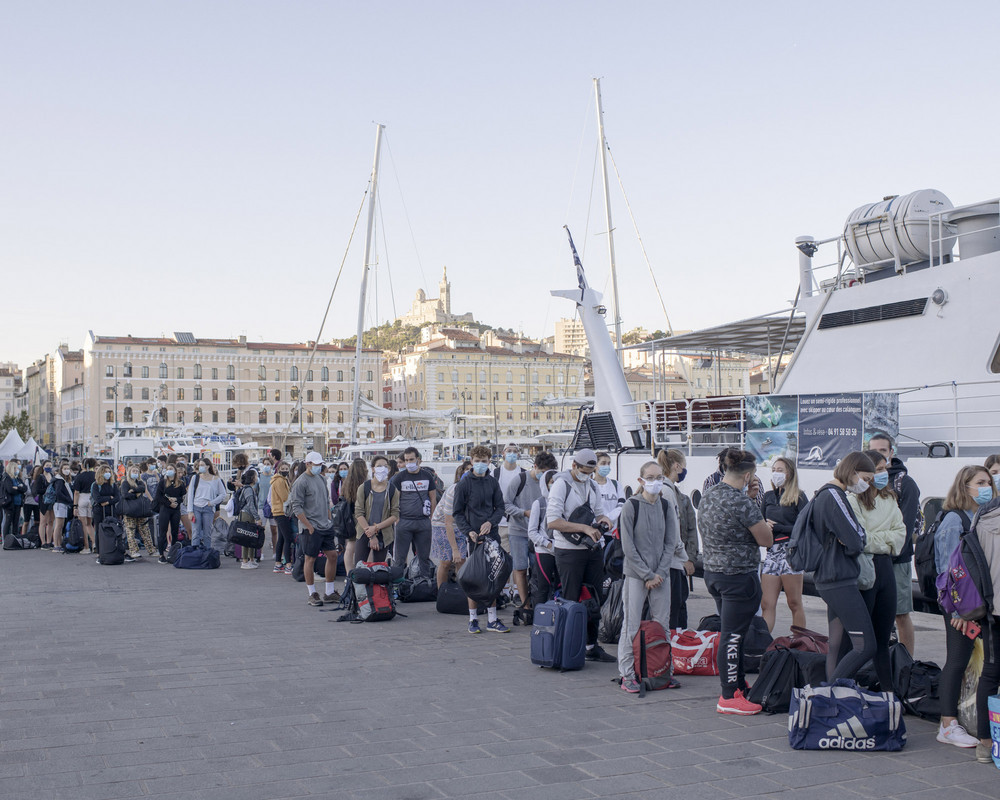 From walking to walking ....

Since 2018, the GR2013 Guide Bureau has been in charge of organising the inaugural trip for the entire class of first-year students at the Ecole Nationale Supérieure d'Architecture de Marseille (ENSAM).

Since 2019, this trip has been offered in partnership with the South Provence-Alpes-Côte d'Azur Region, as part of the European Nature For City Life project. The bivouac walks followed by visits to the project sites become more specifically animated in the spirit of the actions designed and implemented by the GR2013 Guide Office within the project.

The purpose of these itinerant actions is to inform and raise awareness among students (inhabitants and future actors of the city) about the multifunctional role of green and blue infrastructures (IVB) in an urban environment in the face of climate change.

With the help of the guides and during the urban walk, a narrative approach based on sensitive exploration is favoured, favouring an active appropriation of the stakes and an involvement of the participants.

This year, the trip took place from September 2 to 4. It enabled the discovery of the Etang de Berre pond, guided by the walking artists, Nicolas MEMAIN and the SAFI collective. Organised in two stages, a bivouac on 2 and 3 September, then a day devoted to visits to the students' project sites: the Lion saltworks - Vitrolles; the village of l'Esteou - Marignane; the surroundings of the "Tour Aspirateur", on the Caronte channel - Martigues; the "little Camargue" - Saint-Chamas; the old saltworks and the Tête Noire marsh - Rognac.

The discovery of the sites was an opportunity to examine, in the light of the objectives of the Nature For City LIFE project, the place of green infrastructure in the development of our urban areas and the need for their reasoned management at a time of global warming. Thus, it has allowed us to observe the territory in detail and to question its development and conservation in order to better understand how living things settle and live in it.

Each group was asked to produce a report on the discovery of these sites, along the route and by following the different stations led by the guides. The work of the students was then continued by collecting information, in particular via the Internet, the library, the ENSAM archives and on the basis of the observations commented by the guides. Each of these visits gave rise to the production of an observation notebook.

These works have been promoted as part of the Pamparigouste Expedition, visible at 152 de la Canebière from 18 September for Manifesta 13 Marseille, Biennale Européenne de Création Contemporaine. Each group made a portrait of two inhabitants of the shores of the lagoon, met or envisaged during this crossing of the territory: human, non-human, animal, plant, living or dead... These portraits were made by gathering side by side heterogeneous material documents (archives, articles, photos, drawings, etc.). They make it possible to describe any "inhabitant" of the banks (chosen by the group with the teachers and guides) and his or her singular way of occupying the place: the clam, the cane, the tern, the hunter, the coot, the pipelines...

In spite of complex organisational conditions, Mistral, fires and Covid-19, which required a great effort of adaptation, this trip was a real success, bringing together 240 people, students and teachers of architecture.