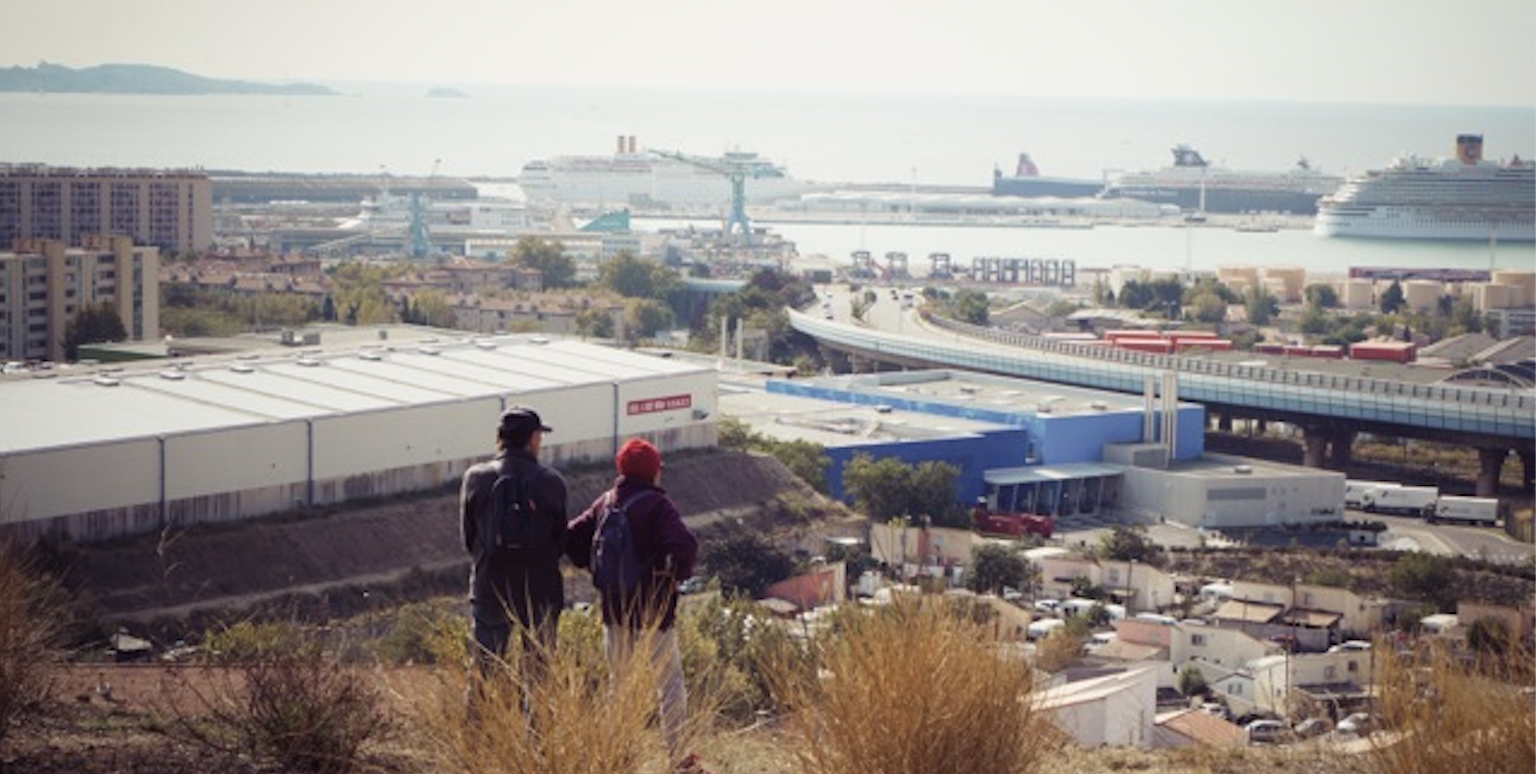 Back in narrative, images and sound on the urban walk of March 13, 2019 in Foresta led by the SAFI collective and the Guide Bureau of the GR 2013...

The wind picked up this morning on Foresta and Patrick Bayle is our guest. A naturalist by training, he has participated in the writing of observation sheets for the Atlas des oiseaux in Marseille, has worked at the Natural History Museum of Marseille and in the city where he is now in charge of biodiversity.

He warns us, for bird watching the wind, the late hour is 9.30 am, and the group is not favourable conditions. It's better to move in the early morning or at sunset, alone or in small numbers. So we simply set off on a quest for ecosystems that could be home to birds and tracks that would indicate their presence.

The Mountain Grebe, the seafront and the retention basin

Like other migratory birds, the Grebe Castagneux approaches Marseille via the seafront. After a trans-Mediterranean crossing, it arrives on the exhausted coasts and discovers in Foresta a rare stopover, with habitats, food and few predators (less than in the islands).

Foresta is structured around two water retention basins. In spite of their artificial character, these basins, whose main quality is that they have not been concreted, have evolved into a reedbed.

They are wetlands, quite unique in Marseille, which attract aquatic species to reproduce or for a migratory stopover. In 2014, Le Grèbe was sighted during the breeding period in these basins.

These basins are managed as technical works, today we notice that the basin is emptied, probably for maintenance, because of a lack of knowledge of its ecological and landscape value or to fight against the tiger mosquito. But kept in water and managed as a living ecosystem, the pond would not provide a suitable habitat for the Tiger Mosquito, which greatly prefers the cups of stagnant water forgotten at the bottom of the garden... Better management would provide the birds with a fresh water point and a rare refuge on the coastline.

So we think it is important to broaden the conversation, and why not go and meet the managers?

The Jay, the Pigeon, the Thrush and the Rock Bar

Just under the small rocky bar below the vocational school of La Viste, a few downy oaks form an oak grove, a relic of the old Foresta estate.

These trees are home to the Oak Jay, a beautiful blue raven that feasts on acorns, which it gathers, hides and forgets, thus gardening the forests of tomorrow. Along the way, we also find perfectly cleaned pigeon bones. Patrick Bayle names and situates each one of them: a pelvis, leg bones, wing bones, a shoulder bone and another located at the sternum, which only exists in birds.

Climbing up a little in the forest, in the rocky bar, hides a cave. Inside, several varieties of broken snail shells indicate the location of a smithy. The forge is used by birds such as the musical thrush, heard this morning, they wedge the shells between two pebbles to hold them and break them with their beaks. It is therefore a bit like the thrush's kitchen workshop...

In the open environments that make up a large part of Foresta, there are many isolated pine trees. From this one, the powerful and virtuoso singing of the Serin cini can be heard. The Serin sings its territory and marks it. To the males, it signifies its presence in this way: don't come, I'm at home... To the females, it signifies its presence with a nuance: join me, I am at home...

The Gull and the city

At the beginning of the 20th century, a British naturalist was raving during an "expedition" to the Marseilles islands of the hundred or so pairs of gulls nesting there. Today, thousands of pairs of Great Black-backed Gulls reside in Marseille. Nicknamed "rubbish collectors", they are indicators of our waste-producing lifestyles. Nature is on the move, environments evolve, especially when they are heavily anthropised, and species are not fixed in their future. What is abundant can become rare and vice versa.

Shrubs and the Warbler

At the beginning of the Vallon leading us towards the Parc Brégante, we find the unfilled hill and its springs. The very high density of shrubs provides hiding places and habitats suitable for a variety of birds: blackbirds, nightingales, chickadees... We hear the alarm call of the melanocephalous warbler, the only one of the five Mediterranean warblers to live in an urban environment.

Let's listen to it, because we will never see it. It is one of those birds we live with, that we hear, but never show up at our eyes.

In Foresta already 76 bird species have been observed.

If you would like to go further or send us your observations: